In front of the Basilica, on its southern facade, is a square. A calvary illustrates St Martin sharing his coat, surrounded by St Perpet and St Gregory of Tours. Standing at 51m in height, the dome is topped by a statue of St Martin blessing the city. It is made of bronze by the sculptor Jean Hugues. It measures 4.25m and weighs 1,692kg. 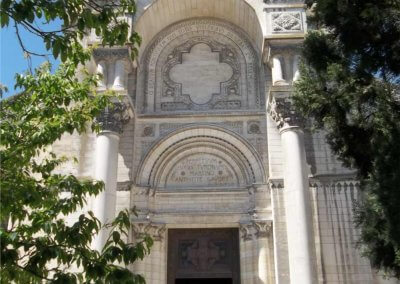 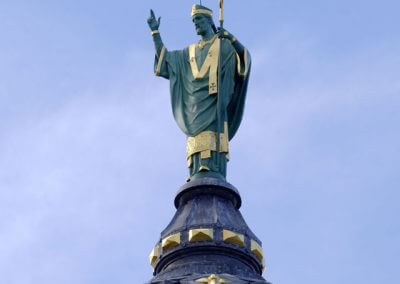 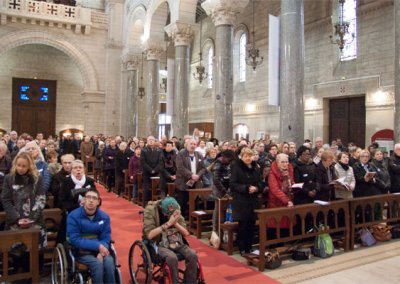 We go down to the tomb through two wide staircases. A crypt houses the tomb : ten ornate columns of Scottish marble with carved capitals delineate five naves with aisles. On the ground you can see the boundaries of the early church. In the background : the Saint’s tomb.

The tomb is made of marble and pink sandstone from Vosges, decorated with mosaics. The upper part, in the shape of a sarcophagus with pediments adorned with crosses, is supported by ten columns with bronze capitals. It covers the stones of the early sepulchre of St Martin.

The openings on the side allow you to discover the ancient tombstone and the reliquary. Opposite the tomb is the tomb of Cardinal Meignan (1817-1896), Archbishop of Tours in 1884, topped by his statue of him by the sculptor François Sicard.

The walls are lined with numerous ex-voto placed in recognition of prayers answered and other witnesses to the power of St Martin’s intercession. 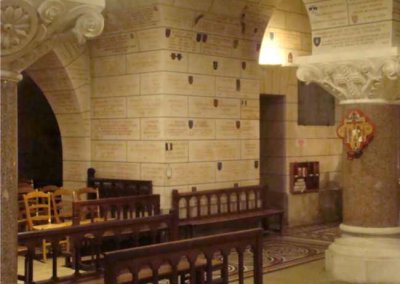 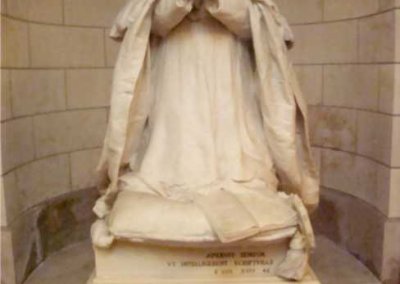 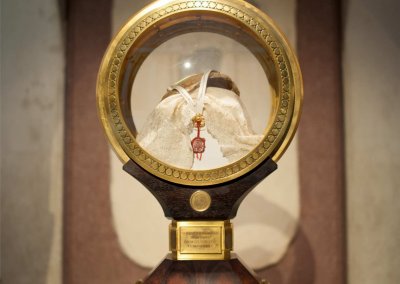 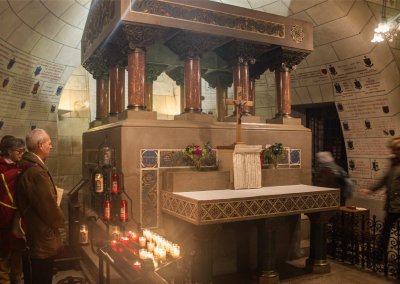 It is a large nave with two side-aisles ; the archways rest on 14 monolithic columns of polished granite from Vosges, each surmounted by illustrated capitals. These naves are covered by a decorative frame, inspired by early Christian churches. The side-aisles end in two chapels with mosaics on a gold background.

4. On the left, the of the Virgin Mary Chapel.

5. On the right, the St Joseph Chapel – Blessed Sacrament chapel.

6. At the entrance, a statue of St Thérèse of Lisieux and an icon depicting her with her parents, Sts Louis and Zélie Martin.

7. A cupola on pendentives overlooks the choir and illuminates it through 22 windows. In the middle, St Martin is seated, blessing with one hand and holding the cross with the other hand. He is surrounded by St Gatien, the first Bishop of Tours, by St Ambrose of Milan his contemporary, by St Lidoire whom he succeeded, and by St Hilary of Poitiers, his master. 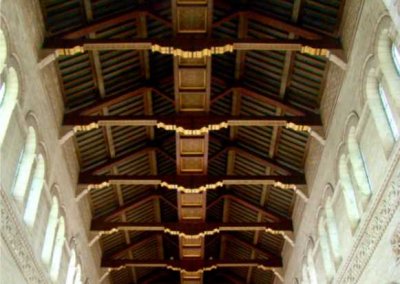 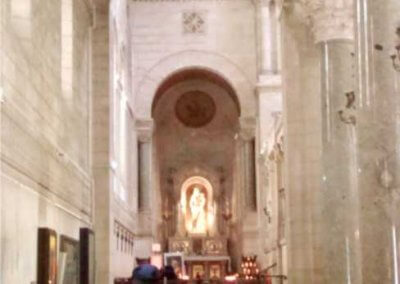 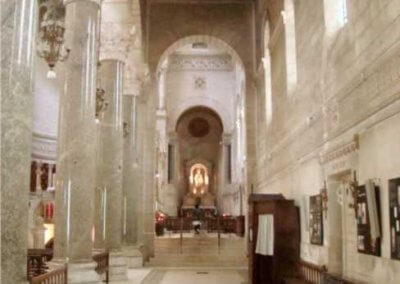 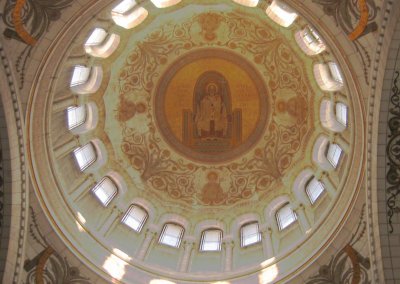 stands above the site of the tomb. The altar itself, donated by Eugène Gouin, is supported by 4 marble columns and small columns of porphyry. The altar contains an  important relic of St Martin, part of his head, hence the nickname given to this altar : “the head’s altar”. Above the altar is a ciborium, designed by the artist Aymard Verdier, inspired by a 13th-century drawing. In the middle, a small shrine houses the relics of Saint Martin.

9. On each side, look at the insignia of the Minor Basilicas :

10. On the right, the red and yellow umbraculum and…

…on the left, the handbells with the coat of arms of the Vatican.

11. The stained-glass windows made by Lobin workshop (12th century) retrace the life of St Martin and his worship throughout the centuries.

12. Gemmail artwork “St Martin embraces the leper” on a canvas by René Margotton (1988).

13. The pulpit is entirely made of stone, marble and mosaic, in the shape of an ancient vat, supported by a single marble column.

15. Plaster cast of the bust of the statue of St Martin erected on the dome of the basilica, made by the sculptor Jean Hugues.

16. The Statue of St Jacques, located at the top of the west interior bay, towers over the visitor. Made from stone, and dating from the end of the 15th century, it is the work of the school of Michel Colomb. Since the 9th century, Tours has been a stop on the way to Compostela, when the previous route of the Spanish towards the tomb of Saint Martin became the main way to the tomb of St Jacques in the opposite direction. 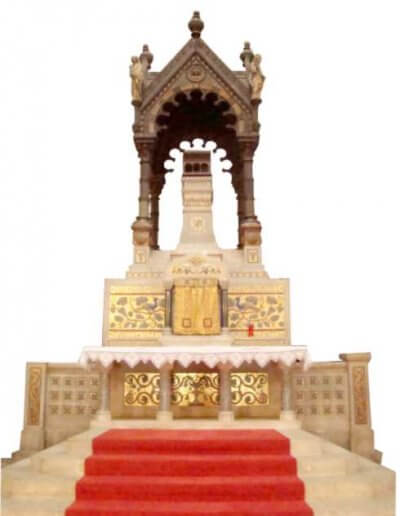 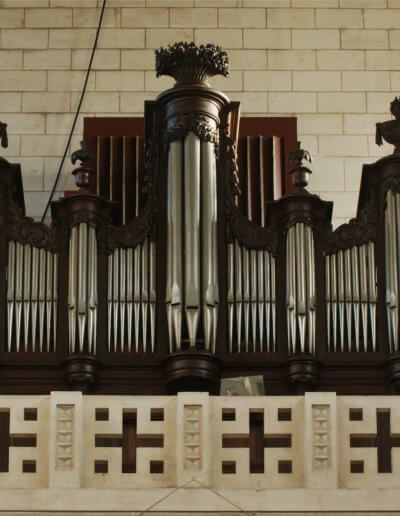 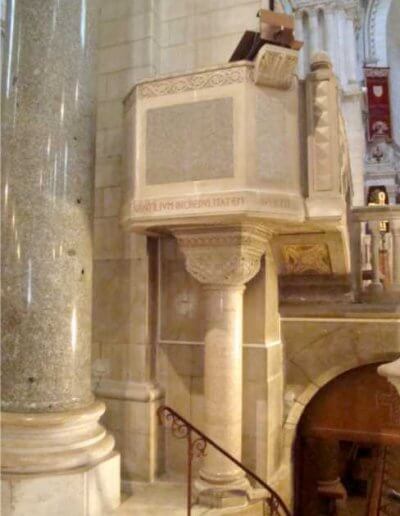 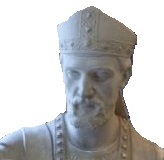 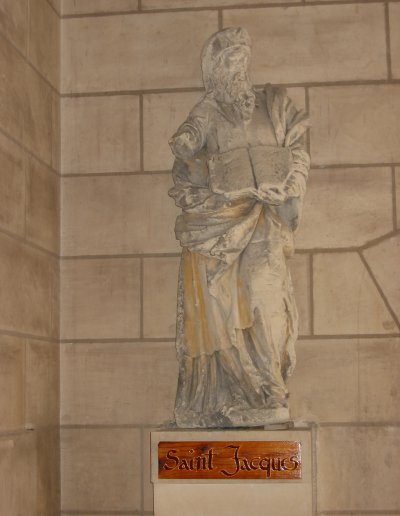 Some important dates in the life of the Basilica

397 Martin is buried in a public cemetery, under the current rue des Halles.

437 A small chapel is erected on the tomb.

471 The chapel is replaced by a basilica, consecrated on 4th July 471. It is 53m long, 20m wide and 45m high. Decorated with silk, stained glass, marble, mosaics, and an array of large and small columns. The basilica suffered several fires, and was each time restored and embellished.

1050 A fire forces another reconstruction. The nave seems to be a replica of that of Saint Sernin in Toulouse : 56m long and 28m wide. Four towers mark the ends of the transept.

1175 à 1260 The Romanesque vaults are replaced by “Angevin” warhead vaults, then a new, larger choir is built.

1562 The basilica is pillaged. The body of St Martin was burnt. Some relics are only partially saved from fire.

1793 During the Revolution, the building became a stable.

1797 The vaults fall. The church is destroyed except the Charlemagne tower and the clock tower, which are still visible. In order to definitively prevent any revival of the cult of St Martin, streets are constructed on the site.

14th December 1860 A local resident, Léon Papin-Dupont, nicknamed “the holy man of Tours”, buys land near the site. He finds the tomb of St Martin under a house, at the southern corner.

1887 Beginning of construction of the current basilica in the Romano-Byzantine style, oriented North-South because of the shape of the land available, by the architect Victor Laloux.

1925 Consecration of the new basilica. Clovis visited the sanctuary several times, the last time in 507 after his victory at Vouillé. St Clotilde, his wife, came to spend the last days of her life near St Martin’s tomb. St Geneviève and St Radegonde also came there as well as, probably, Joan of Arc a little later. Dagobert ordered a precious shrine to St Eloi from his own coffers. Charlemagne always paid great attention to the place and came there in the year 800 before his coronation in Rome. His wife Luitgarde died there and was buried where, later, the Charlemagne tower was erected. Over the years, the king St Louis and Blanche de Castille, Louis XIV and Louis-Philippe, also came to venerate St Martin.

316 Born in Sabaria in Pannonia (present-day Szombathely, Hungary). Alternative birthdate is given as 336.

320 His father, a military tribune of the Roman army, received land in the plains of the River Po at Ticinium (Pavia). 1st meeting with Christians around the age of 10.

334 Garrisoned at Amiens, Episode of the Divided Cloak, and baptism

356 On the occasion of the Battle of Worms, liberation from military engagements, then departure for Poitiers; meeting with St Hilary.

357 Return to Pannonia and the baptism of his mother.

358 Period of hermitic life on the island of Gallinara, Italy.

361 In Poitiers, worked with St Hilary, settled in Ligugé as a hermit and then founded the first monastery in Gaul.

4th July 371 Election as Bishop of Tours and foundation of the Monastery of Marmoutier.

From 372 Numerous journeys and travels throughout the Empire. Evangelisation of the villages of Touraine, foundation of the first rural parishes of Gaul. Many exorcisms and healings.

8th November 397 Death in Candes and transport of his body to Tours.

11th November Funeral of St Martin of Tours (and current date of his liturgical feast).

It’ s well known that the 11th November marks the end of the First World War, but above all, this date was first of all the Feast of St Martin of Tours. More than 400 municipalities and 4,000 parishes in France bear his name. Churches are dedicated to him all over the world. It is also one of the most common names in our country.

At the beginning of the 21st century, the walls of the Basilica of Tours daily hear Croatian or Chinese, Portuguese, German, Spanish, Polish…and sometimes also French. We come to request the intercession of Saint Martin near his tomb : that a couple may be reconciled, that a sick person may recover, so that a teenager might hear the words of the Gospel and be baptised, that a small parish church will remain open, so that vocations might be given…

the litany of intentions is long. Saint Martin still has a lot to tell us.

As given in the account by his contemporary Sulpicius Severus (3,1-6)

“One day, in the middle of a winter that was raging more severely than usual, so much so that people perished from the violent frost, he had only his weapons and a simple soldier’s cloak on him ; he met at the city gates a poor and naked man : this wretched man begged passers-by to have mercy on his misery, but they continued on their way. Being a godly man, the soldier understood that this poor man was reserved for him, since the others did not have mercy on him. But what could he do ? He had nothing but the chlamys on his back : he had indeed already sacrificed everything else in similar charity.

Thus, grasping the weapon he was carrying on his belt, St Martin divided his chlamys in two and gave a piece to the poor man and dressed himself with the remainder. At this point, some of the assistants started to laugh, because he looked so pathetic with his torn cloak. But many, who thought more sensibly, deeply regretted not having done anything themselves, when indeed being richer than him they could have dressed the poor man without reducing themselves to nudity.

So the next night, when he had fallen asleep, St Martin saw Christ dressed in half the chlamys with which he had covered the poor man. He was urged to look very carefully at the Lord, and to recognise the garment that he had given him. Then he heard Jesus say to the crowd of angels who stood around him : “Martin, who is only a catechumen, covered me with this garment”. In truth, the Lord recalled his words, he who had once proclaimed : “Whenever you do something for one of these little ones, you do it for me”, when he declared to have been clothed in the person of that poor man.

And, to confirm his testimony in favour of such a good work, he deigned to be seen in the same dress that the poor man had received. This vision did not instil an all-too-human pride in our blessed St Martin, but rather he recognised in his work the goodness of God, and as he was eighteen years old, he hastened to be baptised.” 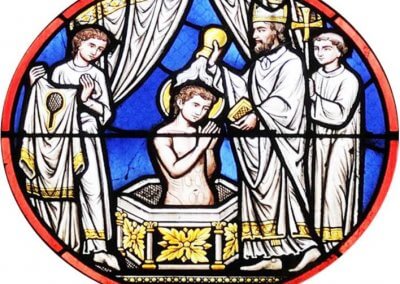 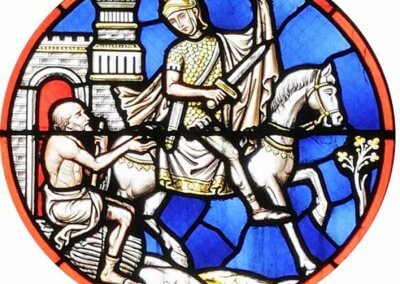 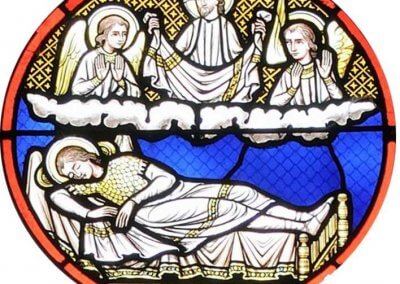 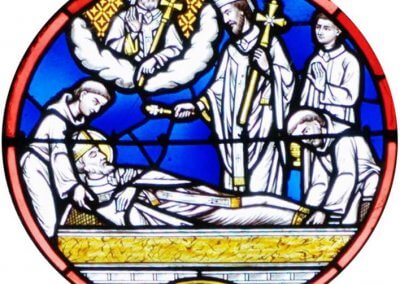